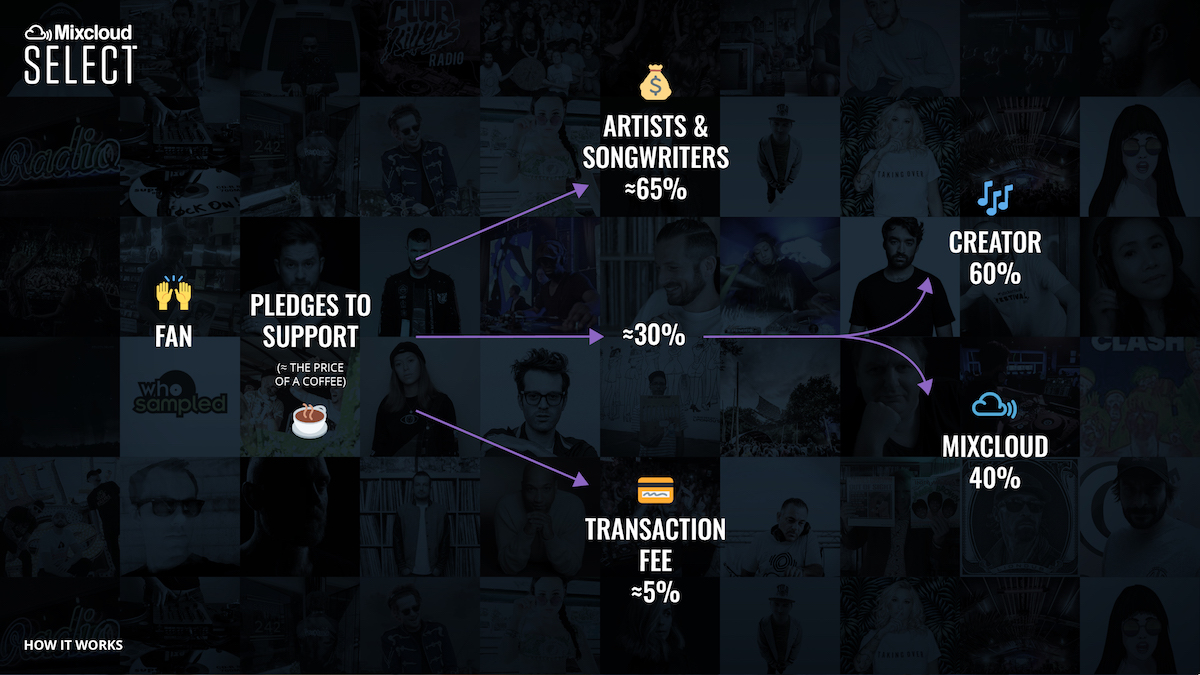 How audio creators can make money with Mixcloud Select: breaking down the model ‘Fan-to-creator’ subscription service for audio creators

Groundbreaking model gets DJs, radio hosts, podcasters and tastemakers into the streaming revenue mix for the first time

About a decade ago, Kevin Kelly’s 1,000 true fans theory predicted an alternative future for the internet. One that wasn’t funded by advertising money, but by direct human-to-human connection. Doing the math, he calculated that any creator could make a successful living based on two simple criteria. First, you have to create enough to make $100 a year in revenue from individual true fans. Second, you have to have a direct relationship to your fans.

Six months ago, we announced the launch of Mixcloud Select, a fan-to-creator membership layer to Mixcloud that would enable audio creators to get direct support from their biggest fans. Hundreds of creators have since been brought on for early access, with more being onboarded everyday.

A few creators now getting direct support from their fans with Mixcloud Select.  This isn’t just another “all you can listen” subscription service. What we’ve designed is a unique revenue share model that lets DJs, radio hosts, podcasters and other cultural tastemakers be recognized and rewarded as a valuable part of the audio streaming ecosystem, for the first time ever. Plus, it ensures that the music and artists they play in their shows receive royalties fairly.

We’re giving creators the tools to drive music culture forward, funded directly by the people who care most about what they’re doing.

Let’s break it down.

About one million minutes of audio are uploaded to Mixcloud everyday in the form of “long form audio” shows. A single show can last between fifteen minutes to five hours, but typically consists of about an hour of expertly curated musical tracks. We’re talking DJ sets, radio shows, podcasts and mixtapes that make up a rich catalogue of over 15 million shows made by creators worldwide.

Creators on Mixcloud Select range from collectives to labels to DJs to radio stations
Every music track out there in the world has two underlying pieces of copyrighted intellectual property: the sound recording (usually owned by a label) and the musical work (usually owned by publishers).

When you stream any show on Mixcloud, for free, the underlying tracks are identified through audio fingerprinting. Mixcloud pays a royalty fee to those labels and publishers, who then distribute amongst the artists and songwriters.

We’ve always done what was needed to have the right licences in place– but we also came to realize that an important piece of the puzzle was missing. The core members of our community who we’ve always championed– the DJs, community radio stations, record labels, festivals and collectives– weren’t able to make money from people listening to their stuff online.

Which is why we set out to make direct deals with Universal Music Group, Sony Music Entertainment, Warner Music Group, Merlin, Warner/Chappell Music Publishing, ICE and many others. These deals are groundbreaking, because they identify the “long form audio creator” as part of the digital revenue mix.

Powered directly by fans rather than advertising money, we’re now able to let revenue on our platform flow in all the right directions.

So how does it work? Say you’re a fan of Lefto, a Brussels-based DJ who’s known for showcasing emerging artists in his genre-defying radio show to audiophiles. Or perhaps you’re a fan of techno superstar John Digweed, one of the biggest DJs on the planet, who attracts tens of thousands of listeners to his legendary Transitions show week on week. Maybe you love collectives like Club Killers or Soul Clap. Or you’re into tastemaker radio stations like Amsterdam’s Red Light Radio, Gilles Peterson’s Worldwide FM or Tim Sweeney’s Beats in Space to keep your finger on the pulse.

Whatever your jam, if you’re coming to Mixcloud as a fan, it’s likely you’re listening loyally– in fact, fans who have subscribed to a creator on Select spend about a third of their time on the platform listening to that creator’s channel, and they become twice as engaged after subscribing.

For (£/$/€) 2.99 a month, or a slightly higher price set by the creator– essentially the price of buying a monthly coffee – fans can subscribe to their favorite creator channel or choose to pledge more. Might as well upgrade that coffee to a pint!

Of that small monthly fee, a first cut goes toward the artists, labels and publishers who own the rights to the tracks played in that creator’s shows, as well as a small credit card processing fee.

The creator then gets 60% of what’s left every month from everyone who subscribes to them.
The other 40% goes to Mixcloud, so we can invest it back into the platform and keep things running– administering our licenses, building the website and the apps, hosting the audio, paying our rent, etc.

Mixcloud was built by creators for creators. We wanted to solve our own personal frustrations as DJs and music lovers, by building a home to share and discover our favorite mixes, radio shows and more. One of the hardest challenges we faced was doing things the right way, legally, by respecting copyright and paying rights holders.

Today, we’re not just building a platform where any creator can safely share their shows and find an audience. We’re carving out what we believe is a fair and more sustainable future for online music, where anyone can feel inspired and supported to keep creating.

We want to see a world where every creator can find their true fans, alongside the music industry rather than against it. In doing so, we’re enabling every fan to give back and show they care about driving culture forward.